Posted on December 20, 2016 by missoulacommunityschool

Last week in mindfulness we revisited emotions and what feeling a certain way may look like.  We read a book called Today I Feel Silly by Jamie Lee Curtis, and then had a look at some pictures of real life children to guess how they were feeling.  There was no right or wrong answer while looking and guessing the picture children’s emotions.  We talked about how sometimes someone might be feeling more than one emotion at the same time, or how some emotions like frustrated, angry, or jealous can look and feel very similar.  After some talk of emotions we took turns pretending to be angry, confused, sad, excited, jealous, and a few other emotions while I took pictures of the kids.  We’ll be making our own feeling chart for the school with all of these pictures!  While kids were waiting for a turn to have their feeling picture taken we colored a page for our journals on what emotion we were feeling at the moment.

Anytime you talk about your feelings, or notice what people’s body language or faces look like when they are feeling a certain way you helping foster emotional awareness.  It’s fun to make faces in the mirror of what mad, sad, or excited looks like.  Say what you notice about your face or your child’s when they are making mad faces. “Look at how your eyebrows point down and your noise wrinkles when you are mad.”  When you read books or watch shows together point out that someone has a frown on their face, or if they are stomping because they are frustrated about something.  If you have the time you can take your own family feelings pictures to make flash cards or a feelings poster.

Today in mindfulness we started by ringing the bells and had a visit from our dear friend Barry the Breathing Bug.  Barry took some deep breaths with us and showed us again how his body gets big and stretched out when he breathes in, and smaller and more relaxed when he breathes out.  After taking some big breaths we played a game where we tried to guess what was inside a very mysterious box.  As friends shook the box and made their guesses we also talked about what it feels like to not know something.  Some friends were excited to play the game, while others were a bit apprehensive or even worried about not knowing what was in the box.  We continued to talk about our feelings as we guessed what was in the box, and noticed how our feelings changed as got closer to opening the box.  Children who were nervous about what was in the box in the beginning found that they started to feel excited when it was time to find out and open the box.  We also talked about the feelings they had after they knew what was in the box.

After sitting for so long we played a game called “shake it up!” to relieve some of our excess energy, and practice our mindful listening skills.  Friends pretended to glue their bottoms and feet to the floor, and explored what kind of movement we could still do even though our bottoms and feet were stationary.  I had a small drum that I played a simple rhythm on.  When I played the drum the kids shook their bodies to the corresponding beat, shaking faster as I sped up and slower as I drummed slower.  After playing the game we checked in with our bodies and noticed how the shaking movement made us feel.  Many of the kids noticed their bodies felt hot, tired, and some even felt relaxed afterwards.  We took a few more breaths with our friend Barry and said goodbye to him until next time!

Play your own game of Mystery Box! It helps strengthen kids listening and feeling senses, but also helps reinforce that it is alright to not always know the answer to something.  You can take turns putting items inside the box so your child also has a turn to be the one knowing the secret.   “Shake it up!” can also be played in a variety of different ways.  If you have the space you can shake your whole body while standing, or if you are in a smaller space you could also have and item to squeeze or do some swaying or rocking to the rhythm that someone plays.  Drums are fun, but if you don’t have one around you could pat on your legs or use a different instrument. 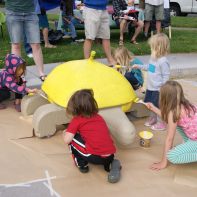 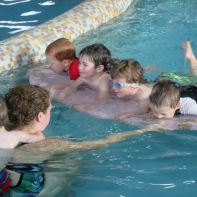 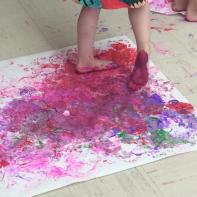 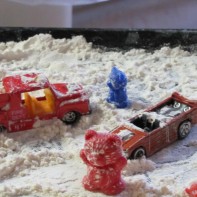 Calendar at a Glance

Access the full calendar
on our Calendar page.
First Day of SchoolAugust 28, 2019